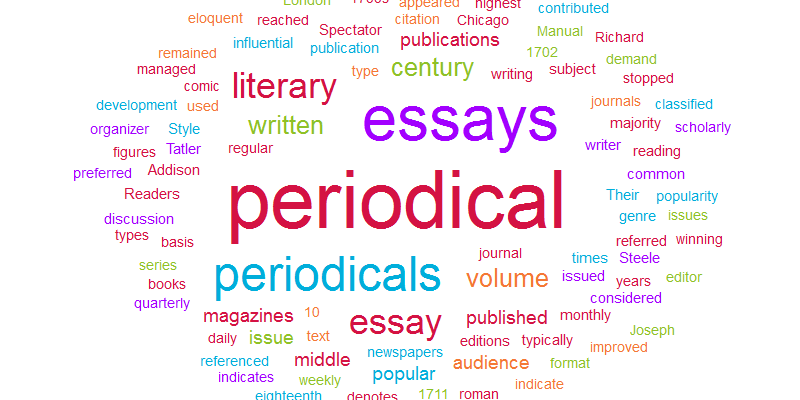 A periodical essay is a type of writing that is issued on a regular basis as a part of a series in editions such as journals, magazines, newspapers or comic books. It is typically published daily, weekly, monthly or quarterly and is referenced by volume and issue.

Volume indicates the number of years when the publication took place while issue denotes how many times the periodical was issued during the year. For example, the May 1711 publication of a monthly journal that was first published in 1702 would be referred to as, “volume 10, issue 5”. At times, roman numerals were also used to indicate the volume number. For the citation of text in a periodical, such a format as The Chicago Manual of Style is used.

The periodical essay appeared in the early 1700s and reached its highest popularity in the middle of the eighteenth century. London magazines such as The Tatler and The Spectator were the most popular and influential periodicals of that time. It is considered that The Tatler introduced such literary genre as periodical essay while The Spectator improved it. The magazines remained influential even after they stopped publications. Their issues were later published in the form of a book, which was in demand for the rest of the century.

Richard Steele and Joseph Addison are considered to be the figures who contributed the most to the development of the eighteen-century literary genre of periodical essays. They managed to create a winning team where Addison was more of an eloquent writer while Steele made his contribution by being an outstanding organizer and editor.

Typically, the essays can be classified into such two types as popular and scholarly. Also, this literary form was written for an audience of professionals who preferred to read business, technical, academic, scientific and trade publications.

However, for the most part, the periodicals were about morality, emotions and manners. Readers expected essays to be common sense and thought-provoking. Publications were relatively short and mainly characterized as those which provide an opinion inspired by contemporary events. Periodicals were meant to be not “heavy”, especially those which were referred to as popular reading. The majority of topics in the periodicals were supposed to be appropriate for the common talk and general discussion.

Many essays were written for female readers as a target audience. Periodicals were aimed at middle-class people who were literate enough and could afford to buy the editions regularly. The essays were written in a so-called middle style and high education was not required for reading the majority of the contents. Over time, many periodical writers shaped their styles in order to satisfy the literary taste of the audience.

All periodical essays tend to be brief but texts written by a columnist and freelance essayist would slightly differ in length. The former writes his material trying to shape the subject of discussion to fit the requirements of the column. The latter though can take advantage of a more liberating approach by crafting his work the way he wants as long as his text manages to effectively highlight the subject.

Periodicals evolved in the 19th century and single essays were almost fully replaced by serial essay publishing. The writings became more eclectic, flexible and brave being at the same time literary and conversational.

Do you need the help of a professional essay writer? Contact us today and get quality assistance with writing any type of paper. Getting good grades has never been so easy!